Ever wondered what it would be like to live and work on a fishing vessel in the far North where it’s cold and dark and conditions can be brutal? Thanks to sister companies Telenor Satellite and Telenor Maritime, crew onboard Hermes are able to optimise their work at sea and share their experiences with colleagues and family. 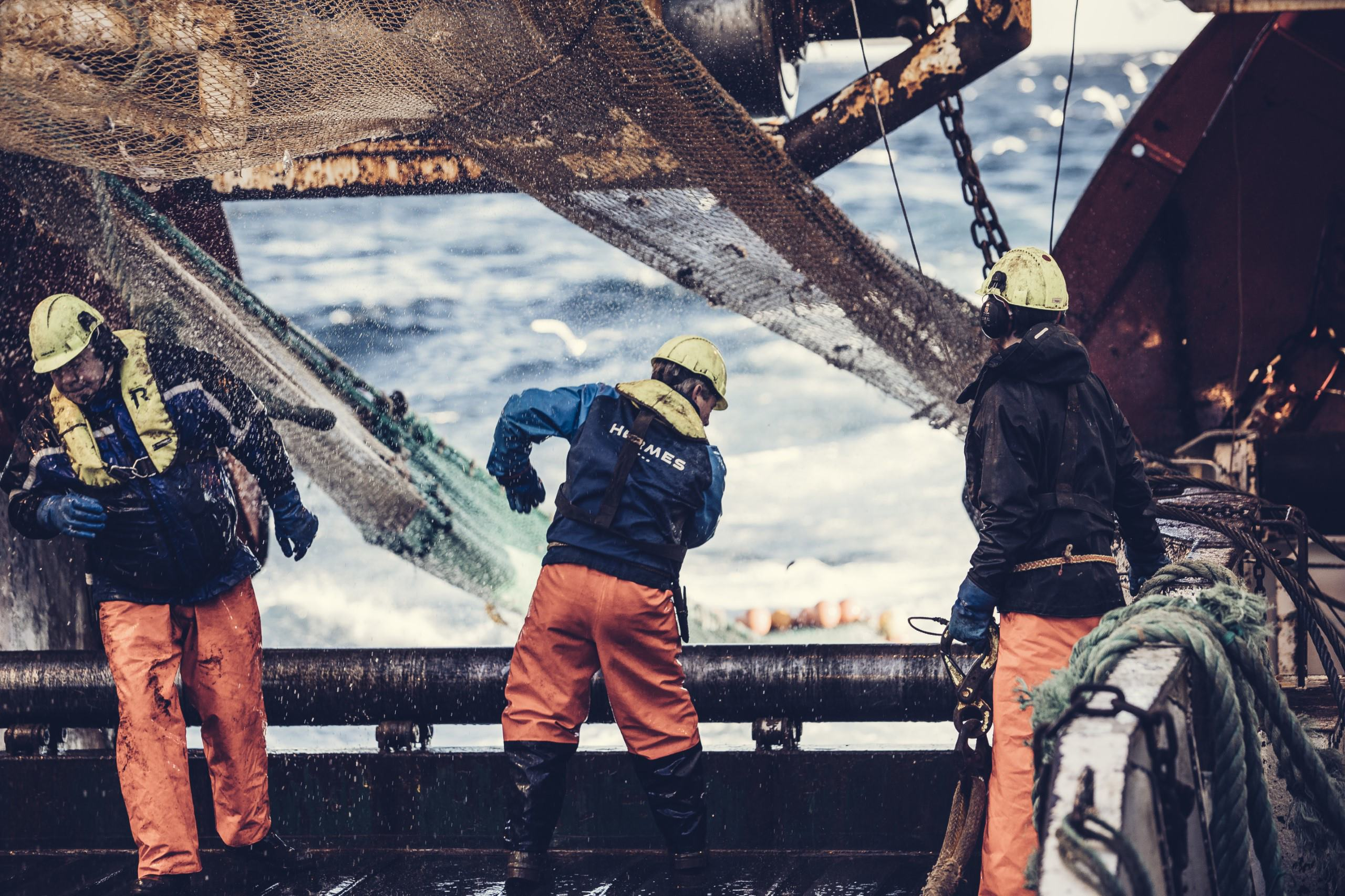 For vessels operating in the far north, reliable satellite communications is essential. Photo: courtesy of Hermes.

Possibly one of the most recognisable names in Norwegian fishing, Hermes has been operating out of Tromsø in the Arctic Circle for just under 70 years. The company employs some 50 people of whom 45 are involved directly in the fishing business. The current Hermes vessel was acquired in 2006 and runs with a rotating crew who spend five weeks onboard followed by five weeks at home.

The ship operates 24 hours a day, catching and processing fish, with crew working two six hour shifts a day – a shift pattern that takes some getting used to. In fact, the only person onboard able to sleep for more than five hours at a time is the steward. And with its fishing grounds in the Barents Sea, around Svalbard and Spitzbergen, or even further north where conditions are icy, dark, cold and windy, it is a harsh environment for the ship and its crew.

Empowering a fishing vessel with the connectivity of a cruise liner

With the ship in operation all day, every day, connectivity is a big concern, so a reliable satellite communications provider operating in the far north is essential – and Telenor Satellite fits the bill perfectly. Explains Jan Roger Lerbukt, CEO of Hermes, “We rely on excellent communications links, not only for the safe operation of our vessel but also for our crew who use it to unwind during their off-time.” But the ship uses its communications links for far more than that! 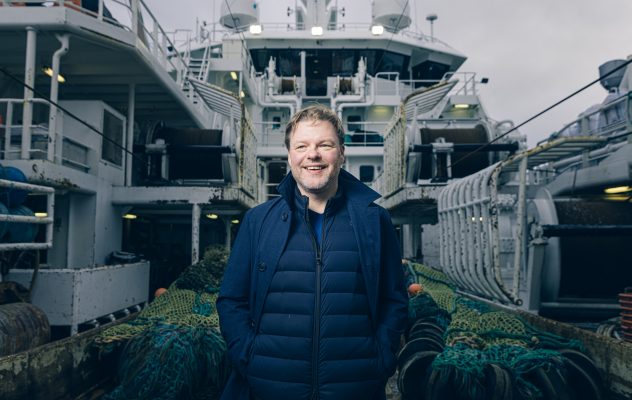 One of the first things Jan Roger did on buying the vessel was to install a satellite connection. This has been updated regularly so that the links available on board are always at the cutting edge of connectivity. As would be expected, the ship has wi-fi throughout. What is perhaps more unusual is that there are also a lot of cameras onboard which are used for live video feeds from the vessel. To handle this demand for download and upload functions, the ship has exceptional bandwidth which is more in line with that found on high-end cruise vessels.

“We have been involved in a number of TV broadcasts and YouTube videos, so we make very good use of our bandwidth. We are currently in the process of developing weekly shows that we will be streaming in High Definition (HD). High bandwidth isn’t only beneficial in terms of broadcasting, but also for crew welfare. Crew are able to use their mobile phones exactly as they would on land and, bearing in mind that we operate in extremely remote areas where injuries or illness can be particularly dangerous, we are able to consult directly with medical staff via zoom or similar. And when you factor in the increased happiness of the crew, the additional bandwidth has significantly improved safety onboard, as well as staff retention.”

The equipment onboard Hermes is quite remarkable for a fishing vessel. It has three satellite dishes, one Ka-band and two Ku-band. The original dishes were Ku-band, but there was a need to double up because of blockages caused by the mast.

The Ku-band antennas are 1.5m each and very heavy, so they can’t be positioned high on the mast, but must be placed on the wheelhouse. The Ka-band antenna is 1m (Ka-band can operate with a much smaller diameter terminal) and so is located higher on the ship. This delivers a 12/3 Mbps Ka-band service, which could be upgraded to 24/6 Mbps if required. Hermes needs as much stability as possible when operating in the far north, so some redundancy is important. What is more, it is impossible to carry out repairs at sea so back up is vital. 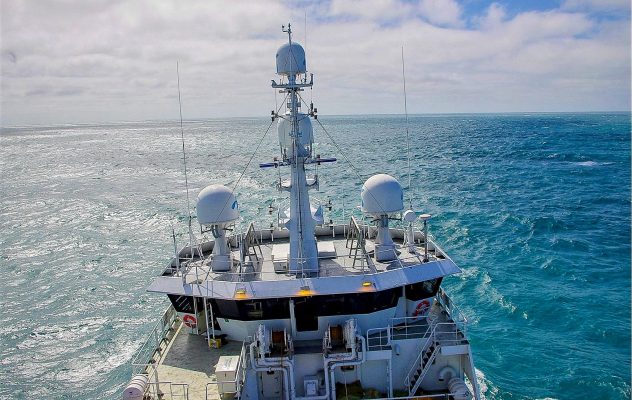 “I would actually like to have an additional Ka-band antenna too so that we have backup on both bands. In fact, we have been experimenting with the Ka-band and we have been very pleased with the results when we are further south. One of our Ku-band dishes has been in for repairs for the past few months and by combining the two bands we have been running at very close to 100%.”

Hermes began livestreaming in 2016 when the company first moved to Telenor Satellite via its communications supplier, Telenor Maritime. Knut Fjellheim, Chief Technology Innovation Officer at Telenor Maritime, was very impressed with the set up on Hermes, “This fishing vessel operating out of Tromsø was, and still is, probably one of the most advanced Norway has in terms of communications.”

Hermes bought two Ku-band antennas that had previously been used by NRK (the Norwegian state broadcaster) for one of its slow TV shows. In 2019 Hermes undertook 35 days of livestreaming from Greenland which was shown on both Norwegian television and YouTube. None of this would be possible without the satellite communications links provided by Telenor Satellite in the far north.

It is Telenor Maritime which provides the complete service to Hermes, but Jan Roger has found the close relationship between the two Telenor Group companies to be particularly helpful. “When you try to do something special you need to have people who understand what you’re trying to achieve. Being able to talk to or connect to the right people, in this case the satellite owner or the bandwidth provider, is vital when you are pushing the boundaries. And whenever Telenor Maritime has new technology, we’ve been happy to be the guinea pig for that and it’s been very good for us to be first mover in this space.”

Pushing the boundaries of technology

“On occasions we have tested technology and we couldn’t believe the speeds we were getting, and how far north we were able to travel and still receive a great service. I think we are the first commercial users of this service in the region, and I don’t think you will find any other Norwegian vessel with better internet connections than we have on Hermes.”

The company actually has 13 Mbps of combined upload delivered by way of a 12/3 Mbps Ka-band service delivered on iDirect Velocity® together with a 30/10 Ku-band service using Newtec Dialog® as it needs to deal with the challenges of latency and compression of the livestreaming. In addition, there needs to be sufficient bandwidth to deal with drops in connectivity – the audience expects to receive a good quality result.

“We have found that the service we have received from Telenor Maritime and Telenor Satellite has been perfect for us as they are both prepared to push the technology. Rather than working within perceived limitations they are always ready to see what is possible and work around any problems to provide us with the outcomes that we need.”

As Jan Hetland, Director Data Services Division of Telenor Satellite, explains, “We pride ourselves on giving our clients the optimal solution for their needs, and we thoroughly enjoy being thrown a real challenge, and then finding a way to solve it. Operating as far north as Hermes does can pose real challenges for satellite communication links, but I am pleased to see that our technical team was able to resolve these.”